The Unbearable Whiteness of Ken Burns

A good takedown from Steve Sailer at TakiMag.com, and commentary from iSteve.

... which leads me to observe,

The US is a social democratic matriarchy, offering up emasculated weenies like Ken Burns as male role models.

But feminized, cerebral men are an indulgence of civilization, which itself exists only because men like this are willing to defend it against thuggery. And while they're doing that, Ken Burns gets CPB grants to make documentaries that pretend men like them don't exist and never contributed.

In more blunt terms, the US elite is protected by tough men willing to undergo hardship, and the elite take advantage of their cocooned existence to mock and subvert their defenders' values. And it doesn't stop there. The US elite throws up immense barriers to entry, primarily in education costs and other government policies that hamper affordable family formation. (I could go on, because it's a very long list.)

How is such a situation sustainable? When do the defenders tell the elites they're taking their service rifles and all the ammo they can carry, and leaving the elites who despise them to the thugs?

Somewhat related, on which of two kinds of men must weaker members of society rely for protection, or even just to assist them down some steps? 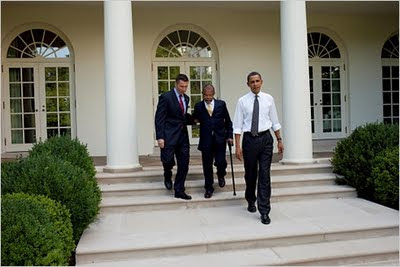 At some point, the guy on the far left has to wonder why the ectomorph in the foreground gets the lion's share of the take.
Email Post
Labels: angry white guys culture ken burns obama


ken burns is a weenie personified, and i'll never watch any of his garbage again...


we have to, at some point, let the masses know how much the elite hates them, and how the elite basically conspire against them through hyper-status-competition and uber swippelry, and we have to take tax dollars away from the elite and defund the ken burns'es and the professorariate, and propaganda-wood, and npr, and the news-networks
August 13, 2009 at 1:01 PM

Jonathan said…
There's a reason the elite are the elite. They're not necessarily more intelligent, but they are cleverer in terms of controlling social and governmental institutions. The non-elite are led into one stupid affair after another, some of which involve the expropriation of their bodies and money for useless wars, but even then they are rarely truly discontent, unless the war or the social program or whatever goes really, really badly.

The non-elite Right is further marginalized the more anti-intellectual it becomes, since it is pretty consistently unable to offer anything other than either statist fascism or reactionary retreatism, both of which are ultimately pretty knuckle-dragging. That, and the racism, obvious or latent, of the Right means it is almost always unable to forge any sort of coalition among the various groups of non-elite, a fact which has long helped the elite. The Left, while better able to, at least in theory, forge coalitions, is at heart a vanguard ideology, in all of its statist forms, which means the continual recreation of a very deliberate elite that will continue to expropriate from the non-elite. The irony of all this is, of course, that in either case, the masses will continue, in all probability, to be used as tax-farms and cannon fodder by their rulers, Right or Left.
August 21, 2009 at 8:56 AM

Maxim said…
Unfortunately, both Ken Burns and the nice young men in the photo are working for the real thugs.
August 30, 2009 at 9:58 PM