A Joint Terrorism Task Force had been tracking Boyd at least since 2006, interested in his growing stockpile of armor-piercing assault weapons and his rural training expeditions on the Virginia border with young Muslim men, as well as the networks he used to finance and plan trips overseas.

His 'crime' appears to be being Muslim while owning and training with firearms, and participating in a US-funded guerrilla war that its sponsors now find embarrassing.

White Christians who train with firearms: they're next.

Thus the State continues its process of delegitimization, prosecuting non-crimes and sending young men to fight for foreign governments while Mexican drug cartels conduct low-grade warfare on US soil and vast stretches of US cities are no-go zones for the law abiding.

I mean really, the cops have everything so nailed down here, what conceivable reason could anybody have to engage in martial skills training?

Quite frankly, I think this guy's a much bigger threat to me and mine: 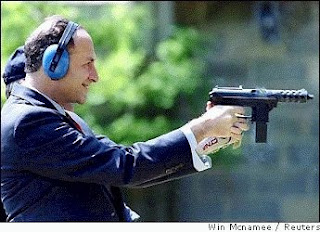